Björn Persson is an internationally renowned artist based in Stockholm, Sweden. He has spent many years travelling around the world in search of adventure and spectacular images. His passion for this planet’s beautiful wildlife and humans is reflected in his images.

Björn looks upon his work as an art form rather than pure nature and documentary photography. He sees the animals as they truly are; emotional, thinking and conscious beings with different personalities. He tries to portray their souls and translate their wisdom with his camera as his paintbrush. Instead of creating despair about their threatened situation, he wants to give people the urge and inspiration to get involved.

Apart from fine art photography, Björn is committed to documenting and raising awareness to the threatened species situation. His passion for wildlife was born when he trained in field care and worked with anti-poaching in South Africa. That’s when he discovered what a critical state the wildlife is in. Since then, Björn has used his camera as a weapon and against wildlife poaching, and donated substantial amounts towards wildlife conservation.

Recently he released his new photography book The Real Owners of the Planet, which celebrates the beauty of the African wildlife. It’s the first in a series that will cover the endangered species of every continent in the world. 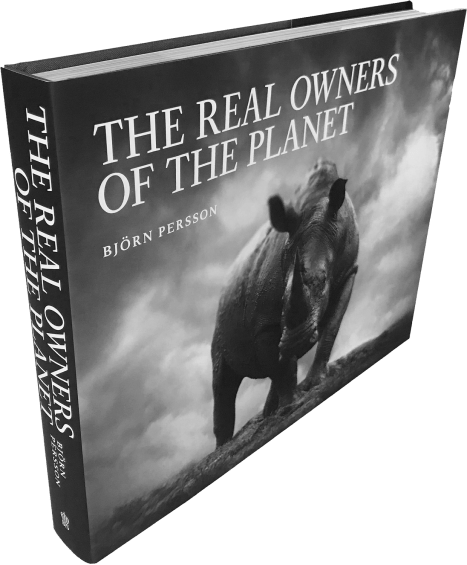 The Real Owners of the Planet is not just another wildlife photo book. Hopefully it will make a difference. The aim is to spread attention about African endangered animals, and raise funds going directly to their protection.

Africa’s animals roamed this planet long before humans did. Some of them are more than 30 million years old, and the first humans only appeared about 190,000 years ago. Despite our short existence on earth we have managed to wipe out several species and drive many more to the brink of extinction.